I just completed another Art House Co-op project, (My seventh! I love these guys, so inspiring!) called The Mystery Project, where I created an artwork to be left in a public space to be found by a stranger.  Again, this was an inspiring project and really got me thinking on my art making, the objects I create (or not, as the case may be, as a conceptualist), and my audience.

I was sent a kit with supplies to guide me in my creation. Included was a 'theme' and a free Canary Yellow Prismacolor fine art marker. My theme, "Things and the people and places using them" was fairly wide open, and became my main inspiration, as I am often thinking on objects in relation to my art making and how one assigns meaning and value to objects. The marker, with two differently sized, flexible tips, while nice and bold, was fairly uninspiring. The color did not 'pop' for me, and drawing is more of a private activity for me, one that I use in working out my ideas, but that is not my finest skill, and not the primary material presented in my artwork. 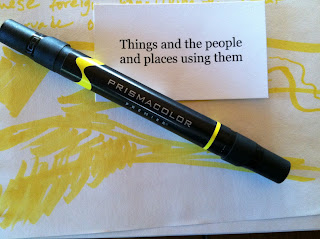 Thinking conceptually, I considered what would be considered a pinnacle object in our contemporary society. A cell phone or computer? Which object carries with it the most significance? Did I want to choose some obscure object, or something common to all? I continually kept coming back to Meret Oppenheimer and her Object, having seen it in person at the MoMA.

Here was a common object, a cup, altered in such a way as to make it unusable, offering a commentary on how we perceive objects we use and come in contact with every day. By adding the foreign materials, the useful object become useless, converted to art, a surreal object with a higher purpose.

This was what I wanted to create. The cup signifies a communal meeting, an object used to nourish our bodies, and something common at social gatherings.  Using found materials, I altered a wooden cup, lining it with red velvet, and it became something else, a unique special object - art.

I felt badly not following the rules designated for the project, but it was also stated that the work  could take any form, so I went ahead with it.  Expecting the work to be generally misunderstood, (see the previous posts regarding my audience...) I decided to leave it in one of Fort Collins' best coffee house/book stores, The Bean Cycle/Matter Books, hoping that the person who encountered it there would have a basic knowledge of contemporary art, or at least a curiosity to explore. (i.e. book lovers.) The colorful title of the book pictured nearby was the impetus for my final choice of location.

The work's reception is a mystery to me. I will never know who sees it, who takes it home as their own, and how it is perceived. But this is part of the adventure of art making, putting one's work out in the world, it is no longer mine, and the public can do with it what they may. It was not easy to leave, as I was quickly becoming attached to it, as I enjoyed its tactile beauty. But, I slyly set it upon the shelf, pretending to look at books, unnoticed by the few folks working nearby on their computers.  Perhaps it may still be there when I return one day. If not, I hope it finds a place where it is appreciated and enjoyed, as I did its creation.

Posted by Valhall Arts at 3:55 PM No comments:

Duchamp, nothing and an already made artwork

Every summer, I take time off from the gallery life, and take a sabatical from the exhibitions at Valhall Arts.  Instead, I leave behind something for my visitors to see.  Something that is nothing.

Last summer it was an installed hole in the ground, dug in the middle of the gallery, an obvious falsity, (and Andy Goldsworthy reference) 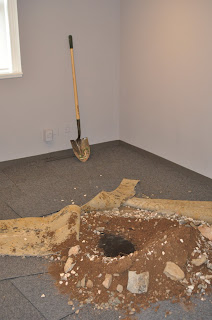 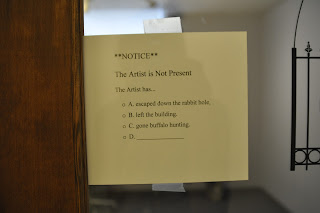 I presented it as a joke, but also a truth.  The title, The Artist is not Present, was a direct reference to Marina Abramovic's performance (that I went to see) at the MoMA, and the shovel left in the space as a nod to Marcel Duchamp (specifically his "In Advance of the Broken arm"). The multiple choice question didactic was a way to playfully engage the audience, while dropping clues to some of my favorite popular cultural ephemera, as well as a statement of my feelings toward the reception of my artwork by my local audience. It's a construction of an environment, one that the audience was excluded from (only able to look through the window in the closed and locked door), using common objects, symbols, and cliched ideas.

This year I have installed something along this vein, however at the this point in my work, I have reached a state of utter disregard for my local audience. I feel like after the 4 years that Valhall Arts has been open, I have taken them as far as they are willing to go in regards to viewing and thinking about contemporary art. Their responses are baffling and frustrating, and mind blowing in their ineptitude. I am instead focusing on my ideas, my work, and marketing it to a broader audience, beyond my neighborhood, hopefully for viewers who care to take the time to understand it. This situation could be considered a brief re-enactment, an homage of sorts, to Duchamp and his behavior at the end of his career when he stated that he was no longer going to make any more art, and instead, just play chess. (Image below is Duchamp's window display for Andre Breton's  Arcane 17 at the Gotham Book Mart, 1945) 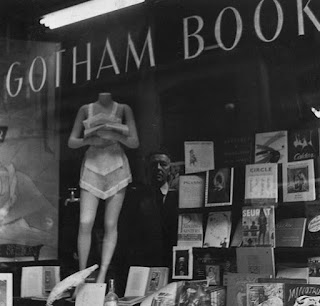 Time would reveal that this was a sort of performance art in itself, as Duchamp was busy for many years creating his final grand artistic gesture. (The creation of Etant donnes -- link via ToutFait.com, is to an animation by Robert Slawinski, and involves the five following unaltered works by Duchamp in the order in which they are listed below:

I want to leave my audience to wonder where I've gone, as I go out into the world to enjoy all it has to offer. I leave them only a tiny clue, easily overlooked, a QR code to scan, itself a bizarre object unique to our contemporary digital culture. I wave a fond farewell, as I bid them  to "piss off!".  To those curious few who make the effort (and have the smart phone ability) to scan the code, a surprise. See what it will bring? Yep, "Nothing Here." 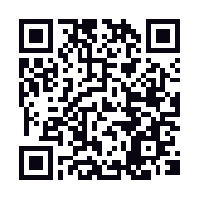